On Thursday 18 August, the old colorful button boxes have been replaced with the new USB Beexybox type of button box in most of the labs. The use of the new button boxes requires the latest version of Linux we installed for you: in the purple boot menu shown by the computers when starting up, simple select “Linux OS (New BeexyBox) [Ubuntu 12.04]” now instead of “Real-time Linux OS (Old ButtonBox) [Ubuntu 12.04]” (this option should be selected by default on all experiment machines that use the new button boxes)

The Beexyboxes have three buttons, as you can see on the image. If you need a box with four buttons, you can stop by and borrow one from us. 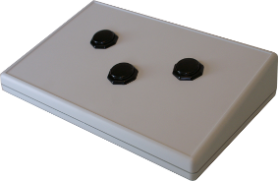 The new Beexyboxes have several advantages, making us confident the old button boxes are no longer required:

The labs that now have the new Beexyboxes are:

We also prepared the connections for the Beexyboxes in the Baby lab and in the EEG lab, but we did not remove the already present button boxes just yet, so you can keep running your experiments there the way you’re used to. Should you want to use a Beexybox instead of a button box, please stop by, so we can provide you with one and give you some instructions on how to use it.