If you have suggestions on how to improve this document, or find mistakes, please send them to labman.gw@nulluu.nl

In this tutorial, you will create a ZEP experiment that runs a grammaticality judgment task. This document will guide you to do this step by step, working from an existing template experiment.

The template experiment that we will use as the base is a visual lexical decision task, where the participants get to see words and non-words, and have to decide as quickly as they can if the word they see is a word or not. The experiment records the answer the participant gives, and it measures response time, i.e. how fast the participant presses the button to give their answer.

3. Get acquainted with the basic structure of the experiment

Now that you’ve run the experiment pretending to be a participant, let’s look at a time line of what it does, exactly:

The experiment consists of six parts:

The programming code that makes all these things happen is located in the experiment script. Every ZEP experiment has such a script, called EXPERIMENTNAME.zp.

We will open the script in a text editor to see what’s in there, but before we do that, we’ll install some fancy syntax highlighting stuff that will make the script more readable.

Download the zep.lang file here. Save it in your home folder (right click on the link and click ‘save as‘. Or click on the link, copy all the text to a new file in Gedit and save as zep.lang)

We can draw a visual representation of the time line of a test trial as follows: 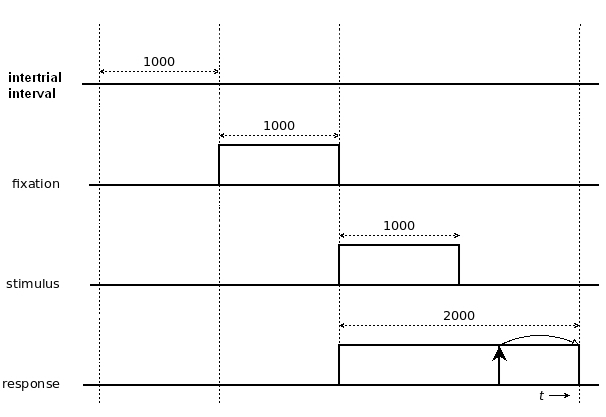 The durations of these subcomponents of the trial can, of course, be changed; different experiments require different stimulus display times.

The values of these durations, and the trial itself, are defined in test.

The vislexdec task (as most ZEP experiment templates) has the following task-specific modules:

Let’s take a look at the most interesting part of an experiment from the experimenter’s point of view: the output.

The output is saved to a database, which is located in the db subfolder of your experiment folder. There are a few tools available to extract the information from the database to a usable format. (For elaborate information on the usage of zepdbextract and all ZEP-related tools, consult the documentation http://beexy.org/zep1/wiki/doku.php?id=experiment:using-zepdbextract.)

So this is how ZEP knows which variables to output in the final columns of the output file (the other columns come for free in every experiment).

One thing to note here is that ZEP is a typed language. That means that every time a variable is introduced, you need to specify which type it has (integer, string, boolean, etc). So ‘int trialnum;’ above means something like: ‘we are introducing a variable called trialnum here, and it is of the type int(eger)’.

Now that we have a general idea of the structure of this ZEP template experiment, let’s start making small changes to it.

The task in the vislexdec experiment is auto-paced with a response duration of 2000ms, which means that if the subject does not respond within 2000ms, the experiment will continue to the next stimulus anyway. This is useful to make participants respond faster (they will want to ‘beat the experiment’). For the grammaticality judgment task that we are working towards, we want the experiment to be self-paced though.

After you changed something, always try out your modified experiment to check that it works as you want it to.
To abort the experiment at any time, press alt-F4 (this is the standard Windows command to close a window).
See the bottom of this page for more information on using alt-F4: http://beexy.org/zep1/wiki/doku.php?id=experiment:control

To break off the experiment without being asked for confirmation, you can also press ctrl-break.

If you get an error in the console, read it carefully and try to fix it.

It is quite easy to change the way the experiment looks in terms of fonts and colors. By default, these aspects of the experiment are controlled in standard modules, which are located in a subfolder in ZEP’s installation folder. If you want to change a standard value, you can just copy the standard module to your own modules folder, and make changes there; ZEP will always give preference to the files in your own experiment folder.

As it stands, only two types of stimuli are presented to the participant: words and non-words. We can extend the stimulus list to add some words of a different type: idiom words (an experiment like that was run in the lab (Brouwer 2011); it showed that idiom words, like non-words, are processed more slowly than ‘regular’ words).

We are now going to use the vislexdec experiment as a basis for creating a grammaticality judgment task, where participants will judge sentences for grammaticality on a seven-point scale.

6.1 Copy and rename the vislexdec folder

For this grammaticality judgment task, we’re more interested in the participant’s judgments than in their response times. That means that we’re also not as interested in having the participants look at the stimulus display window before the stimulus is displayed, and we don’t really need to focus their attention there with the fixation cross. Let’s do a quick & dirty hack to get the fixation cross out of the way:

(Of course, this is a bit of a hack; deleting the fixation cross properly from the stimulus page – coded in test_page.zm – would lead to the same result, and would be a cleaner way to go about it.)

We will now replace the words that we have used as stimuli so far, by sentences. These are the sentences we will use (from/inspired by Juffs 1996):

For the practice phase:

For the experimental phase:

When you try to run the experiment, ZEP will give you an error complaining about an undefined field ‘NON_WORD’ in test_page.zm. It specifies on which line in test_page.zm it finds the field NON_WORD. (NB: ZEP may also give you other errors if you’ve done something wrong, you should be able to fix those by yourself, but ask for help if not).

As you will notice, we have three problems now:

It would make more sense to change the text on the answer buttons to ‘ungrammatical’ / ‘grammatical’ rather than ‘no’ / ’yes’.

The buttons are (as usual) defined in test_page.zm. The definition of the ‘no’ button looks as follows:

You should now have a working grammaticality judgment experiment that has two answering options. We would like to have more answering options, though (it is generally thought that having participants answer on a five- or seven-point scale enables one to regard the response variable as a continuous variable, which broadens the options for statistical analysis). We will start by adding just one button right now and see how that works.

Below is the code for one of the buttons as you currently have them in your experiment:

We’re going to try to make the response part of the test page look like this (where the o’s represent radio buttons – we will refer to them as check buttons in the rest of the tutorial since that’s what the ZEP code does):

We’ll be stealing some code from the ident_fc experiment to make that happen, step by step.

It seems like we need to tell the check buttons that they’re all part of a group, to make them behave properly. You can see how this is done by scrolling down to look at the definition of the second button in the ident_fc test_page.zm: we need to make button 2 ‘join’ button 1, and button 3 needs to ‘join’ button 2.

We will now insert this ‘Next’ button into our experiment, doing some preporatory work first:

You will see that mostly, the checkbuttons do now work as we want, but the checkbutton selection of the previous stimulus is carried over to the next stimulus. This did not happen in the ident_fc experiment, so apparently we need to steal some more code from there.

The procedure that clears the checkbutton selection at the end of the stimulus in ident_fc is the line marked in green in the reset function (search for ‘void reset’ in ident_fc’s test_page.zm):

The next thing that needs to be done, is to put in labels marking the left end of the checkbutton scale with ‘Ungrammatical’, and the right end of the scale with ‘Grammatical’; and of course we need to add four check buttons to get the total number of checkbuttons up to seven.

Finally, let’s look at our data and see how you could process it further.